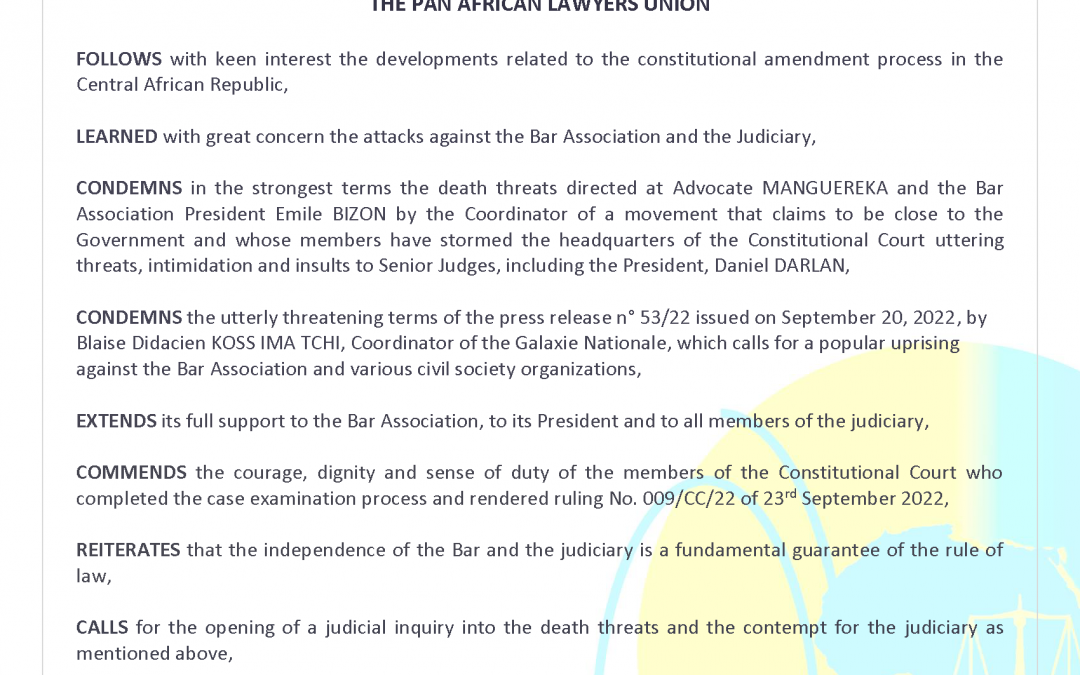 FOLLOWS with keen interest the developments related to the constitutional amendment process in the
Central African Republic,

LEARNED with great concern the attacks against the Bar Association and the Judiciary,

CONDEMNS in the strongest terms the death threats directed at Advocate MANGUEREKA and the Bar
Association President Emile BIZON by the Coordinator of a movement that claims to be close to the
Government and whose members have stormed the headquarters of the Constitutional Court uttering
threats, intimidation and insults to Senior Judges, including the President, Daniel DARLAN,

CONDEMNS the utterly threatening terms of the press release n° 53/22 issued on September 20, 2022, by
Blaise Didacien KOSS IMA TCHI, Coordinator of the Galaxie Nationale, which calls for a popular uprising
against the Bar Association and various civil society organizations,

EXTENDS its full support to the Bar Association, to its President and to all members of the judiciary,

COMMENDS the courage, dignity and sense of duty of the members of the Constitutional Court who
completed the case examination process and rendered ruling No. 009/CC/22 of 23rd September 2022,

REITERATES that the independence of the Bar and the judiciary is a fundamental guarantee of the rule of
law,

CALLS for the opening of a judicial inquiry into the death threats and the contempt for the judiciary as
mentioned above,

URGES the Government to ensure the safety of the members of the judiciary, to abide by the court’s decisions
and to comply with the international commitments made by the country in relation to the rule of law.